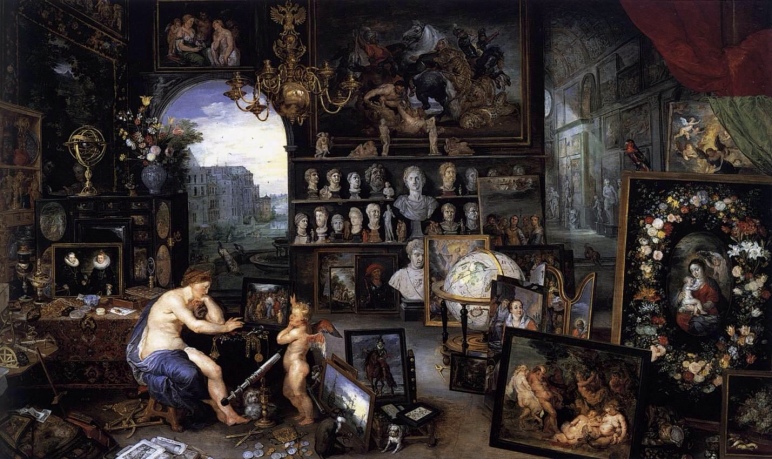 If you step into my work space/office, one of the many things you will notice is a large black file cabinet, hailing from probably the 1960s and having been used by who knows how many disgruntled secretaries with carpal tunnel and bad beehive hairdos. I bought the thing at a used office supply store down on East 5th before the East Side of Austin was a trendy place for hipsters-to-be to spend their ample free time in training to graduate with degrees in coolness.

Minus the one shelf that contains tax files and school loan documents and other boring adult crap that will be tossed into the garbage when I die, the file cabinet has been the repository of most of the creative work I’ve done, at least, what I’ve been able to put on paper as sketches for future projects, ideas, snippets of things, works-in-progress. This includes napkins from the 90s when I was struck with an image for a painting, or an idea for some weird performance art thing involving roaches and water tanks (this was back when I was younger, more ignorant, and living in NYC of all places where you could do that stuff…kinda.) It also includes all of my scripts, bad and good, lots of not so great poetry, and prose.

Of all the items in this file cabinet contains, prose eats up most of the realestate. Why have I kept it all? Because even when I was a teenager, spouting out piles of stuff, I felt that I would find value in it at some point. Well, I have been wrong about a lot of things in my life, but for this I finally got something right. Many many years later, I often find myself digging through these files for new ideas, looking at yellowing pieces of paper, old coffee-stained napkins from my cigarette-smoking days of writing with friends in Mercer Street cafes or other East Side (NYC) coffee shops. It’s strange to read these words that I don’t recognize as having ever belonged to me, but to know them as having come from my hand at some point in the past. I was a better writer at 19 than I am now. I am not sure why this is, although I’m starting to speculate why and will talk about that in a future blog. For now, I think part of it was that I was a bigger risk taker then, a girl who had lived most of her life to that point, in a public education system that was more about babysitting bad kids than giving a lift to intelligent kids who showed some interest in learning. I was amazingly bored and didn’t even know it, and not challenged by anything in middle school or in high school.

So, what happens when you take this kind of kid from Pueblo, Colorado, to one of the most stimulating cities in the world? Her brain is going to go into overdrive and write every bit of anything that passes through her skull. It was a feverish two years of capturing all of that, and realizing, even before turning 20, that it would take several human lifetimes to make all of those precious gems of ideas into solid and real works of tangible art to be experienced, and that most of these napkins of ideas would end up disintegrating over time, probably lost upon my death (wow, I’ve mentioned death twice in one blog post now), the idea gone and useless.

At one point a few years ago, I impulsively painted white sperm all over the file cabinet, as a metaphor for human conception. Most sperm are lost along the way, but only one will be, possibly, successful.

Despite the tragedy of this (not the sperm, but the ideas, there are too many humans on this planet as it is, and not enough great art), I’m still glad I have kept all of this writing and idea collecting.

My prose has been the more interesting parts of all this mental barf. And the more films I have watched over time, the more I have sensed that some of my favorite works have been adaptations from novels, or plays. I have longed at times, to have the luxury to write a novel first, then do a screenplay from this. Why didn’t I? Well, I’ve only made two feature films, and both had very pressing deadlines, which made this novel-writing luxury a bit of a problem.

However, as I have been working on this third script, I don’t have the same deadlines looming over me like an impending cold front. I don’t have a lead actress arriving in a month and staying for five weeks. I don’t have a remote Caribbean hotel open for me only during the off-season. And as I have been reading both Gabriel Garcia Marquez and Chuck Palahniuk on my bus commutes, and although different in styles, they have reminded me of revisiting the magic of language, the prose writing I used to do so freely when much younger.

So, about a month ago, I started writing a novel version of the screenplay I’m working on for my next film, How to Eat Pho. As it’s easily been about four years since I’ve written prose, it has been a shaky start. I have “written” two novels before, and when I say that I mean, writing the first draft in word count. I did minor revisions to them, and let them go into my black file cabinet. That is not writing a novel. Revision is the most major part of any writing project.

But it has been a very enlightening process to be writing prose from a screen play that is in a second draft. For one, I know where I’m going, which allows me to explore the path I am on, without getting lost in the forest. I am also spending so much time with these characters, understanding their histories in the most detailed of ways, discovering their important life moments, and the crappy ones too. I’ve been into Shakey’s Pizza with them on an awkward date where one tells his wife he is now a porn star. I have been in a dingy apartment watching a stack of newspapers get knocked over by an anxious chihuahua and squash an old puppeteer who had dreams of working on the TV show, Fantasy Island. It’s also been fun to be writing from the perspective of the lead character’s puppet, whom I’ve named Mr. D. An intelligent sarcastic cat-like puppet from the mercados of Ciudad Juarez.

Will I actually do the right thing and finish this novel? I’m not sure. It’s easy to get lost in the myriad of projects I have my fingers in, and this novel idea for Pho was just meant to be an exercise in discovery for the film, and I’m also knee deep in landscaping my backyard. But if the delight and laughter I am getting while writing, all by my lonesome late at night with my cats sitting around me like faithful dogs, is any indication, I’d have to say yes. And I’m doing it right next to that massive black file cabinet.