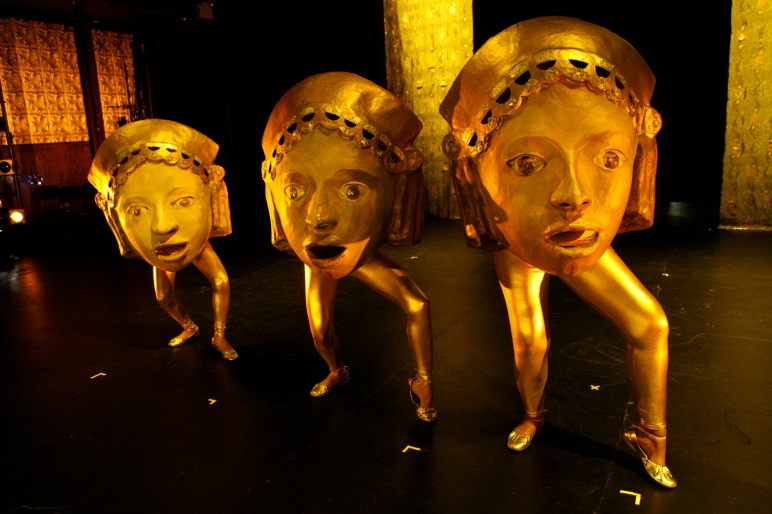 I’m fortunate enough to have started working through the second draft with writer Martha Lynn Coon (Ring, Rip, Rent) who is serving as the dramaturg. While drafts are being reviewed, I’ve been thinking through the visual style of this story, trying to wrap my head about how I want to present these scenes. The last few years of my life have involved a lot of thinking about the artistry of film, how I feel it is more or less confined by standard coverage practices (wide shot, medium two shot, close ups, etc.,) and the structure of the traditional narrative. With the exception of the horror genre, I’ve discovered that film is largely expected to present reality, with a small twist of artistic license. A very small twist. I think this is largely a reflection of the era in which film was born. Other art forms, such as puppetry, have so much more stretch and wiggle room, I’m jealous. Of course, lots of directors go imaginatively beyond this (Jarman, Greenaway, Lynch are a few), and I’ve been wanting to find out what is my specific imaginative “stretch” for this film.  I’m lucky one of the characters, Annie, is a puppeteer, as this gives me ample rich territory to work with.

So, I started making puppets. My first ones. Inspired by Austin’s own puppet troupes from Glass Half Full Theater and Trouble Puppet, I traipsed around fabric stores and Loews, gathered lots of wood, cloth, googly eyes, and began to assemble my versions of the characters, thinking that I might give some scenes a go as a solo puppet show, as told by Annie. My little puppets aren’t that great, and I would never do a live performance with them, but they do the job for letting me get inside Annie’s head a bit, and see what a scene looks like, through her point-of-view, performed by puppets that are her family members. 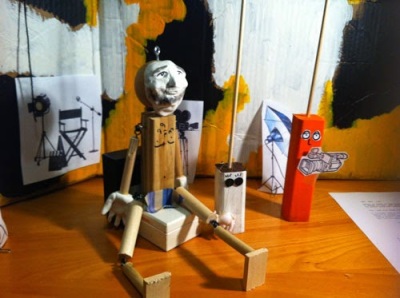 It’s been a strange challenge, as a film director, to try to step into the skin of a puppeteer. I’m sure if there are any puppeteers actually reading this, they are laughing when I say it’s hard to jump from one character to the next, remembering that each should have their own style of movement, voice, and not lose their face from the “audience” (a camera run by Jorge Sermini.) My brain tires easily I have noticed, from this step outside of my normal creative sphere. Ultimately, this is really good for me.

As it took me a while to build the entire cast of this film, (using everything from painted juice bottles, to cubes of wood with googly eyes, to the more complicated ones where dowel sticks were cut and jointed together with eye hook screws and string, faces completed with Sculpy) we have just started filming the scenes. I am interested to see where this puppet journey takes me. 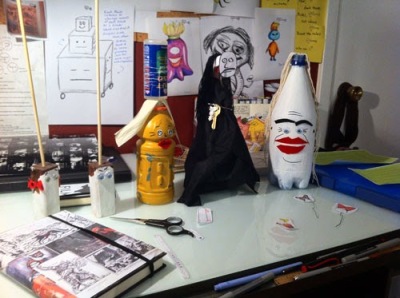 I do want to introduce a puppeteer I have learned about by reading a great book by Eileen Blumenthal called “Puppetry: A World History,” This woman is Theodora Skipitares and her work blows my mind. It borders somewhere between the closely aligned worlds of childhood storybook imagery and adult nightmares. She’s worked with many prominent composers, and puppeteers in other parts of the world. She is now working with Greek myths. I will include some of the images here.

I am working to find the film equivalent in my own work, of how her stagings and works strike me. 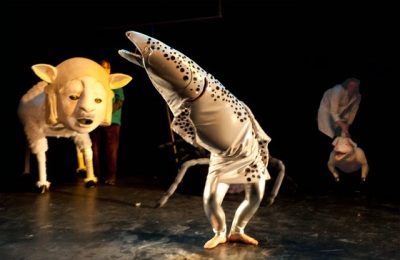 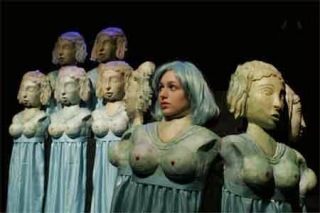 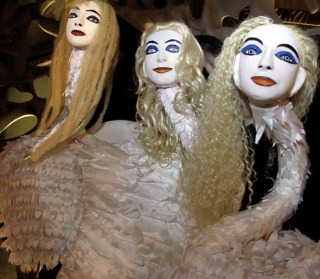