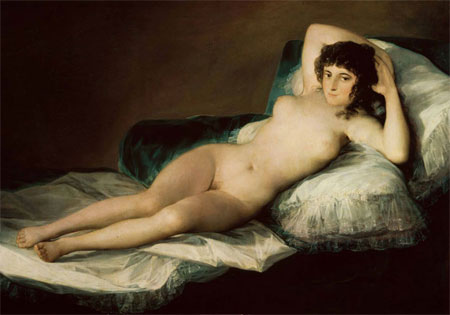 I know several art models that pose nude for artists and art classes. I have done this myself on occasion. Most of the models are women, between the ages of 24-30, white and fit. I know of only one male. His confessions about how artists or students deal with the male body are funny, strange, and alarming. He has told me of more than one occasion where a student has refused to partake in class because there is a nude male, not a nude female. This non-participant is always another male, usually the kind that is in the class for an “easy” elective credit. This male model has told me how some students refuse to draw his penis, and there is just this blank spot on the page where the penis would be, like some recreation of a Ken doll, castrated by the good folk over at Mattel.

In my first feature as a director, In the Shadow, there are two sex scenes. In the second scene, the lead actor’s erection is visible in a wide shot. We shot this at night, so it’s not terribly obvious. It’s certainly not following the shooting conventions of porn, and the wide shot itself has some really fabulous lighting to highlight the mise-en-scene, not the erection. When we acquired distribution, the film was kicked back to us for our cable release because an erection was visible for two seconds. I had to edit out these two second to get rid of the erect penis, then send it back if I wanted the film in a cable release. I call the original film where the erection is still visible, my “Director’s Cut,” which well, if I tie in circumcision, cutting, and…never mind.

Hey folks. Hate to break the news to ya, but whether you like it or not, an erect penis is one reason you are breathing and telling artists to take out male nudity from their films. You, yourself, might benefit from the function of an erect penis. If you are alive, and consider life a “gift,” you certainly already have benefited.

I find it strange that on one hand, people are so fascinated by the cock: the jokes we make about it, the egos and status involved with its size and performance, the masculine identity so connected to it; and yet people freak out when it’s actually right in front of them. Why are we so threatened by the penis? Why do we have to cover it up, put little fig leaves on statues from antiquity when royalty are around? Put black bars over it, or tell directors to cut it out of their movies entirely?

This phallus phobia isn’t inherent for all cultures. In fact, many had or have a very different relationship with the phallus. It’s too much to go into detail here in a blog, but some examples are the Osiris Cult in ancient Egypt, ancient Rome also had their ample share of the phallus in visual culture (see picture above), and a lot of us are at least visually familiar with worship of Shiva’s lingam in India.

In my recent historical research on Puppetry for my next feature, How to Eat Pho, I read over and over again about how many puppet shows had characters with rather oversized erections. Ancient Egyptian puppetry embodied the god Min and Osiris, and gave them removable penises. Indonesian shadow puppet theater often used characters with insanely large erections. Countless cultures have enacted fertility rituals by creating humanlike objects, many with erections. (My book is full of photographs, while the internet seems to be largely devoid of these images. I wonder if this also sheds light on phallus-phobia.)

I know as cultures change, their sexual phobias and interests ebb and flow. Someday, the phallus will be back in fashion, and perhaps even it will become a mascot for a high school football team. But until the day that happens (and I will sadly not be alive to see this, but I’ll write it into a story somewhere), I’d like to suggest that all of us artists need to give the general public a swift kick in the arse, starting with ourselves. If change of what we deem as erotic is going to happen, we all need to take a look at our own phobias, and get over the addiction to the young female nude. Can’t bring yourself to draw that male nude’s “pee pee?” That is your problem. Get over it.

In the meantime, I will leave a link to some modern artists taking a look at the “dirty parts” of the human body. Note, however, the disembodied nature of most of these works, and think: what does it mean to look at a sexualized body part without the rest of the body visible, like the face? In contrast, what is it like like to see the whole body with these “troublesome” parts also in view? How does this change things?

A Brief Survey of Blatantly Phallic and Vaginal Art  on Flavorwire